Hit enter to search or ESC to close
Writings

By Manfredi Beninati November 25, 2017 No Comments

Most (if not all) visual artists are used to working with some sort of noise in the background. Be it music, the radio or silence that allows them to hear the noise of the tool they are using, visual artists give a great deal of importance to what their ears are perceiving during the process of creating their artwork. In most cases, it is necessary to get the rhythm. Painters and sculptors, illustrators and designers, have a unique relationship with their studios’ sounds.

Camillo Amalfi has that same kind of unique relationship with sound, 24/7. He dreams sound, wakes up in the middle of the night and stays up recording till well after sunrise. Music and noise are his whole life since he was a kid and walking into his flat even one who doesn’t know anything about him realizes that immediately, as everything in there is about sound. If one is looking for a clear example to show profanes how sound and architecture can work together, he should make no effort but bring them to Camillo’s den.

Almost everything from the furniture to the minutest object in the house was either designed to produce sound or modified by him. Even the mattress he sleeps on is opened on one side so he can play the springs. While the metallic skeleton of an old one is hung on the wall next to the wardrobe that can also be used as an instrument by just opening and closing its doors to which a system of weights and strings of different materials perpetually rubbing against each other is connected on one end. An old telephone has become a loudspeaker connected to a large plasma ball. Next to this a row of old radios and antennas roughly – but not randomly – nailed or taped to the wall are intertwined in such a way that a human body can modulate the symphony of sounds they produce by just sitting on the sofa just below them or lying down on it. In the kitchen, a dozen moka coffee pots are lined up either on a table or the stove and serve a double purpose​: they make coffee but they are also a sound instrument while the water is boiling.​ ​ Each one has a music note in it. And I could carry on forever describing the innumerable drums, xylophones, customized stereo systems -and so on- that Camillo’s place is filled with.
Camillo is a noisemaker with a solid education in music and a long-term professional experience as a sound engineer. He is also an artist – and a proper one too. Art is about exploring unknown territories. Sometimes getting lost. With a certainty, never about settling for a safe haven.

The project that we have been working together on for some time now isn’t so much about making videos. That can be called so as it is about documenting the way our personalities relate to each other and how architecture and the way we move within it changes when filled with sounds – mostly noises in our case – and vice-versa: how architecture – distribution of volumes and light – affects the way we perceive sounds.

I became an artist as consequence of a bet, not for a particular call. I’d always felt more drawn to cinema than anything else. I took a bet with my brother one day in New York when I turned thirty. The following week I got a studio and started making drawings, lots and lots of it, which were all I could afford back then. Five years later I won the bet when I participated in the Venice Biennale with a highly articulated installation that had more to do with the practice of architecture than the studio art as I had been doing it till then. And also with cinema, as it had been conceived as a three-dimension still from a film that you could edit at your will. The original idea included the use of sound coming from inside the room that was physically inaccessible and only visible through the glass of a door. The day before the opening, though, I realized that the installation naturally had its own natural soundtrack which was the voices and the steps of the visitors echoing through the corridor. No real need to add anything. Actually quite at the opposite, the recorded sound I had prepared would somehow weaken the visual experience. Anything in nature has its own sound. And it’s own architecture. 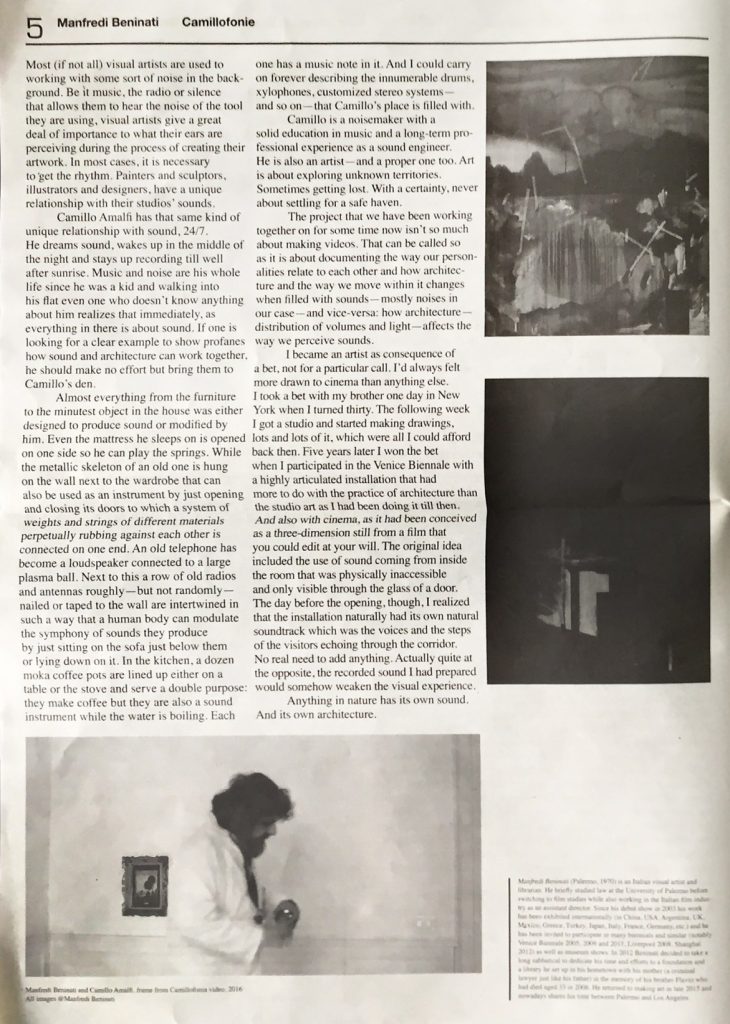