By Manfredi Beninati September 2, 2006 No Comments

In Hans Richter’s Dreams that Money Can Buy, we are taken by the hand and guided into the realm of the abstract, the subconscious and the immaterial. It is the visionary but prophetic story, if we think of modern artistic language, of a young man who has the talent for creating dreams and selling them to those who are looking for them, thus getting the sustenance that would permit him to dream again. The stories that make up the film are written and interpreted by the greatest dreamers of our time, characters who, by charging the object with paradox, sentiment and irony, came face to face with universal themes and helped to ponder new issues that had not yet been considered. Today these are fundamental considerations, which did not exist before then.

In Richter’s film, Marcel Duchamp, Ferdinand Léger, Alexander Calder, Max Ernst and Man Ray play with physical symbols and surrealistic images, immersed in an ideal dreamlike atmosphere. If, however, you approach the film as an amusement, in a lighthearted search for entertainment or pleasant evasion, you will be disappointed. The symbolism of the object and the introspection of the characters reveal thoughts that cannot be entertained with ease and complacency.The same can be said when we speak of the work of Manfredi Beninati: a celebration with fireworks, heavenly settings, brilliant and positive colors.

Psychedelic shapes, visions coming from a temporary state of consciousness, which is superior without having been altered. Like the main character of Hans Richter’s film, Beninati peddles dreams to anyone attracted by his world, and offers a vivid glance at the transmutation of dream into substance. In a scene richly populated by myriads of objects and characters, the atmosphere is unexpectedly suspended. The air is rarefied. The viewer has the impression of having arrived a moment later and to witness what is left. The “action” has already taken place and this is what is left. Beninati erases and paints over, leaving traces of something that no longer exists and giving the viewer what is left of a time gone by, permeated with melancholy and charm. As in an abstract painting, there is only the essence of the memory, a scenic vision appearing in a theatrical setting.

From 1857, when Charles Baudelaire offered the world his Fleurs du Mal, man has always been dominated by melancholy, thoughts, desires and nightmares. And this leads to a strong complicity with the artist. Beyond this veil that seems to suggest distance, and through vertical strokes reminiscent of rain falling from the sky, something happens between us and Beninati, as he invites us into his magic garden. This impalpable but strong complicity, is not connected to the figure but to the structure of the painting that contains it. The superimposition of visions, sentiments and memories proves that an intuitive process can be very long and that something instinctive is not always associated with what is immediate. By using stratification, the process that buries our memories and makes access to them cryptic, Beninati incorporates his universe in a collage, whether it is expressed through painting, sculpture, drawing or collage.

In the installation at the 51st Venice Biennale, the creation of an abandoned drawing room, heavy with time, takes us, by means of a cinematographic use of the image, to an atmosphere reminiscent of The Leopard. A stratification of memory rendered as object, modulated by the presence of Nature, which, following the nineteenth century tradition, takes on melancholic traits. Taking notes for a dream that begins in the afternoon and continues through the night is the reconstruction of the artist’s painting in a cinematographic mise en scene at which the visitor, full of morbid curiosity, can peer through a glass and only imagine the rest. By assimilating, mixing and blending, Beninati creates his sculptures, solid hominids that merge as they melt. Reminding us of disquieting voodoo dolls, these creations demonstrate work on matter rather than a concern with form.

From the transfer of undefined dead matter comes new life. Left to his own devices, the hominid continues to live in the microcosm carefully created around him, in a fantastic and indefinite space. Even though the nature of the elements that inhabit the universe of these works is reminiscent of a fairytale, we cannot create a narration around them. Beninati does not allow it. Objects, characters and calls from different worlds and times are assembled without intending to create a logical whole. Their apparent unrelatedness causes short circuits, appeased by the democratization of the collage that places them all on the same level. Since there are no connections, there are no hierarchies. At first the obvious becomes incoherent and then interesting, and the mysterious labyrinth of dreams freely generates forms. Since nothing dominates, the intrinsic significance of the object is cancelled, leaving only its signifier. Thus, the observer takes on an active role.

By selecting the images he has before him, he bestows a dominant position on the figure that interests him most. The free combination of incongruous elements thus finds its natural expression in collage, the surrealist technique par excellence. In the introduction to Max Ernst’s collage novel La femme 100 têtes, André Breton describes psychic automatism applied to the visual arts as a photograph of thought, depicting reality hidden to the viewers, thus sensing the dominant theme of our century, the psyche. Indeed, Beninati does not intend to photograph what surrounds him, but rather what resides in him, freely leaving fantasy to prevail over rational conduct. The artist ceases imitating the surrounding aspects without abandoning figuration. By varying the placement of the various existing elements, he creates a new one that sums up all the others.

Beninati reveals his aptitude for narration with painting, skillfully writing about his feelings with images. The artist adeptly finds his form of expression with the brush, but his problem is not exclusively of a pictorial nature. Thanks to his multifaceted sensitivity, Beninati could also express himself just as effectively by writing or photographing. A language that sincerely expresses the psyche and that, thanks to the superimposition of different times and ways, escapes a linear view. 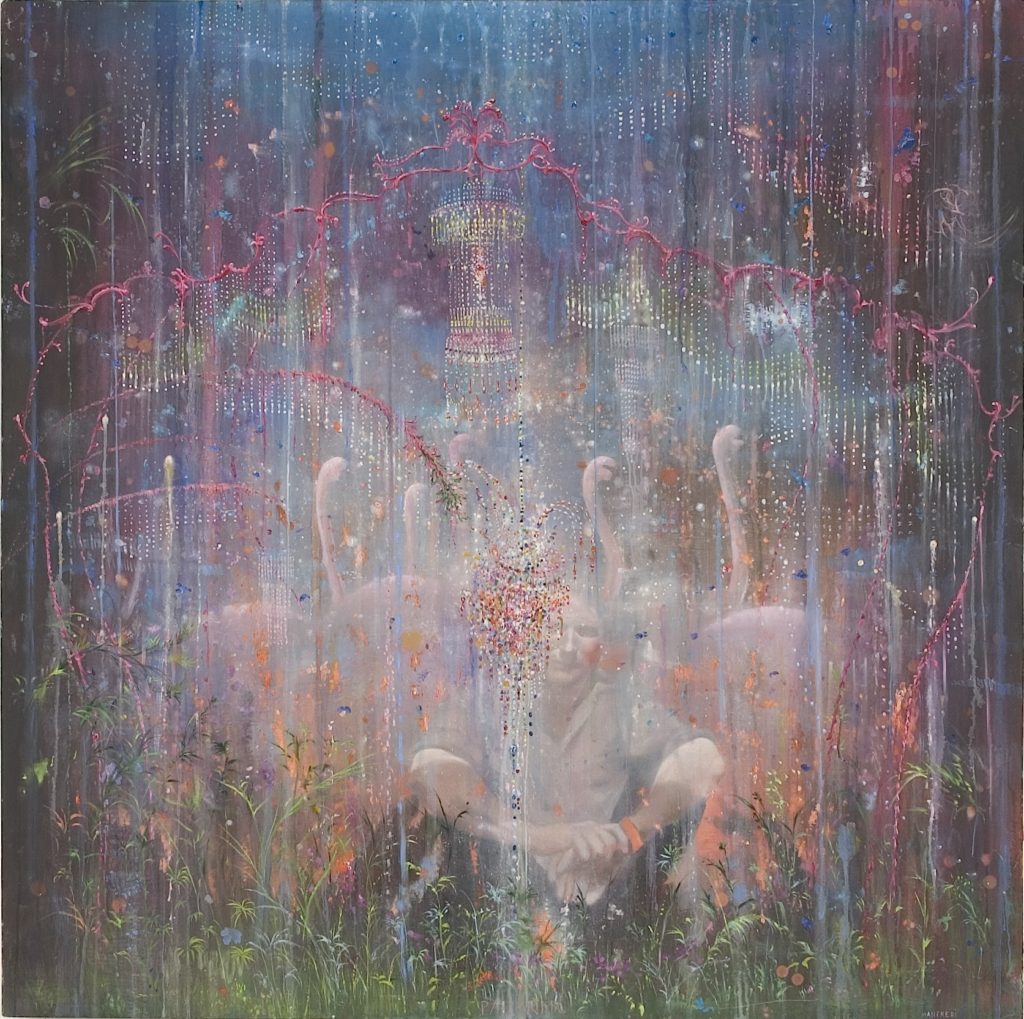 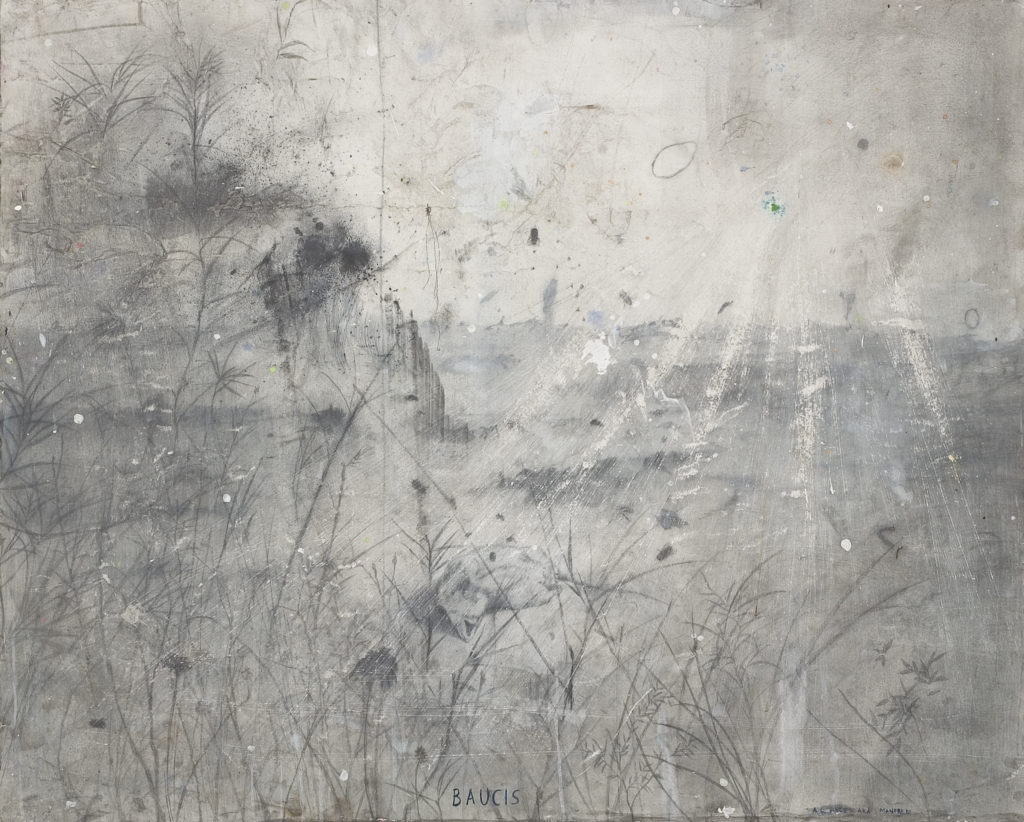 Untitled, pencil on paper on board, 2005